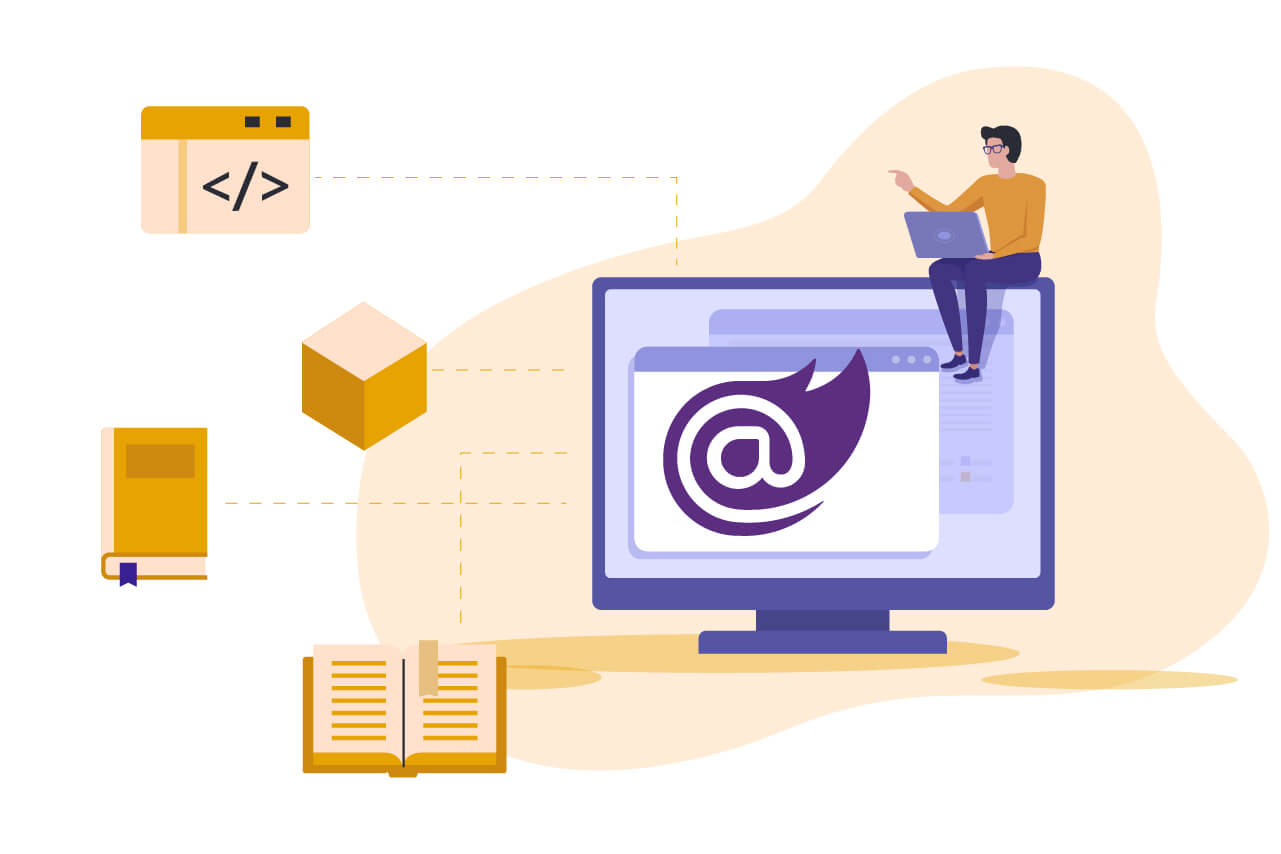 While JavaScript and its ecosystem dominate the web interface space, new possibilities are opening up with the arrival of WebAssembly.

WebAssembly, also known as wasm, has been around for a fair while now. It was first announced as a concept by Mozilla in 2015 and the design MVP was finalised in March 2017 with support for all major browsers being announced later that year. MDN describes it as follows:

WebAssembly is a new type of code that can be run in modern web browsers — it is a low-level assembly-like language with a compact binary format that runs with near-native performance and provides languages such as C/C++, C# and Rust with a compilation target so that they can run on the web. It is also designed to run alongside JavaScript, allowing both to work together.

It seems that Microsoft’s answer to the above solution is the free open Blazor framework introduced in 2018 as part of the .NET CORE environment.

According to experts from thoughtworks.com, Blazor is a technology that is worth discovering in order to understand how it will affect the development and plans of companies providing software solutions:

We see Blazor as an interesting option for building interactive web UIs using C#. We especially like this open-source framework because it allows running C# code in the browser on top of WebAssembly, leveraging the .NET Standard runtime and ecosystem as well as custom libraries developed in this programming language. Additionally, it can interoperate bidirectionally with JavaScript code in the browser if needed.

ASP .NET CORE Blazor app has five different editions and two are now available, and three editions are in the planing stage. 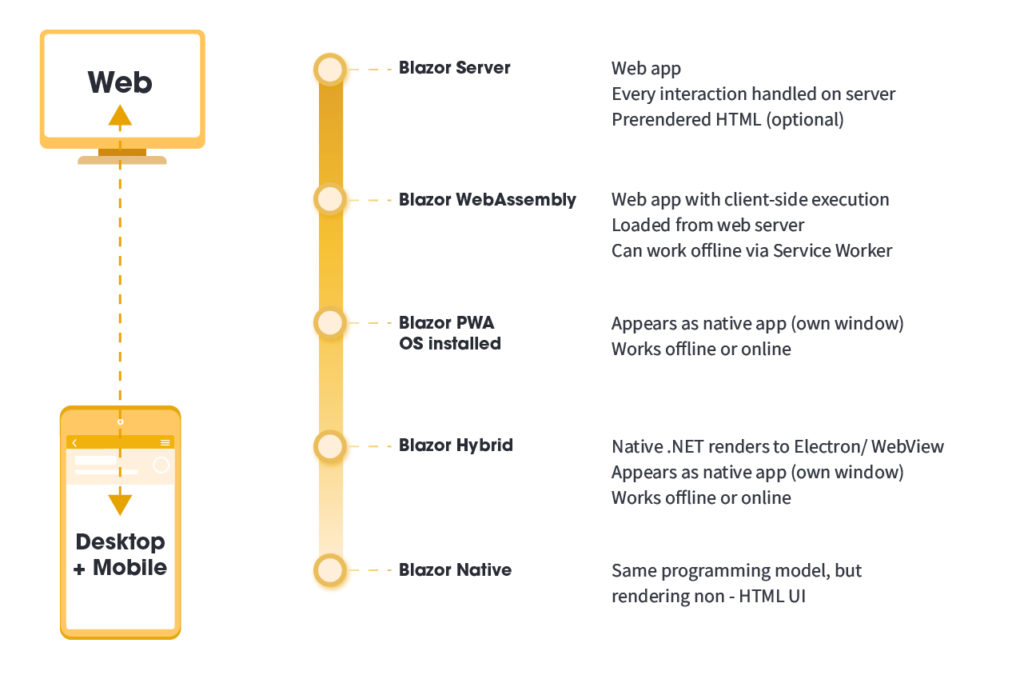 These apps are hosted on the server as ASP .NET Core app in ASP .NET Razor format. Remote clients act as thin clients, meaning that the bulk of the processing load is on the server. The client’s web browser downloads a small page and updates its UI over a SignalR connection. Blazor Server was released as a part of .NET Core 3.

Single-page apps that are downloaded to the client’s web browser before running. The size of the download is larger than for Blazor Server, depends on the app, and the processing is entirely done on the client hardware. However, this app type enjoys rapid response time. As its name suggests, this client-side framework is written in WebAssembly, as opposed to JavaScript (while they can be used together). Blazor WebAssembly 3.2.0 was released on May 19th, 2020.

Blazor is a framework for building interactive client-side web UI with .NET:

Blazor apps are based on components. A component in Blazor is an element of UI, such as a page, dialog, or data entry form.

Components are .NET C# classes built into .NET assemblies that:

The component class is usually written in the form of a Razor markup page with a .razor file extension. Components in Blazor are formally referred to as Razor components. Razor is a syntax for combining HTML markup with C# code designed for developer productivity.

Blazor uses natural HTML tags for UI composition. The following Razor markup demonstrates a component (Dialog.razor) that displays a dialog and processes an event when the user selects a button:

The dialog is rendered when the Index component is accessed in a browser. 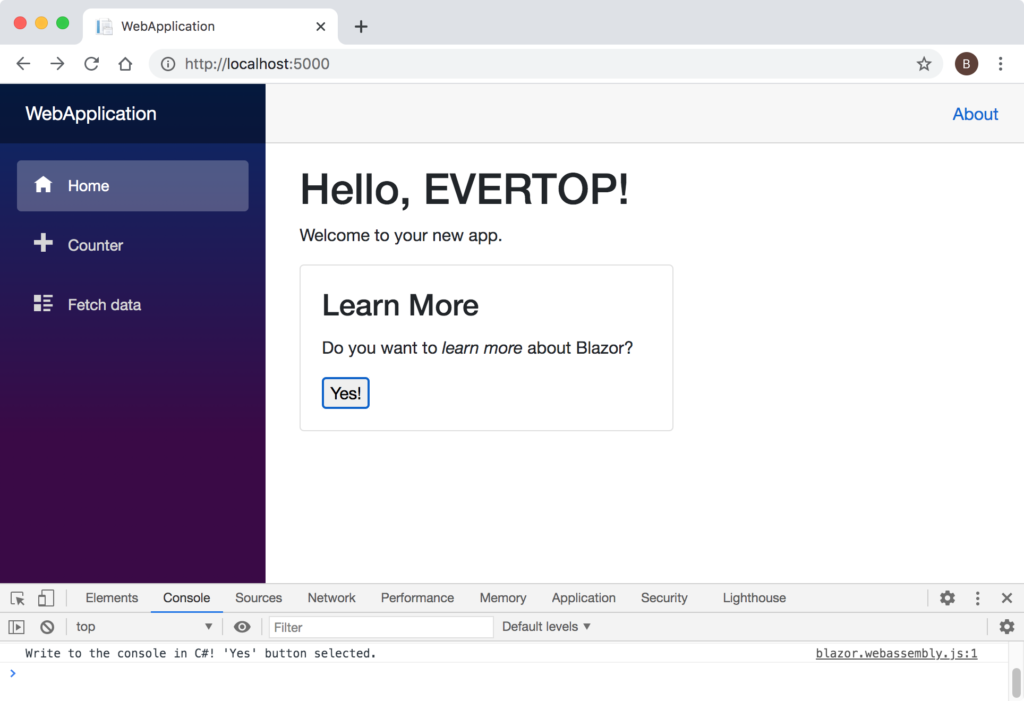 All tools you need – Visual Studio versions or CLI

The Blazor framework provides templates for creating new apps for each of the two Blazor hosting models. The templates are used to create new Blazor projects and solutions regardless of the tooling that you can select and get for Blazor development (Visual Studio 2019, VS for Mac, free VS Code, or the .NET CLI).

Why Blazor is the future for you? 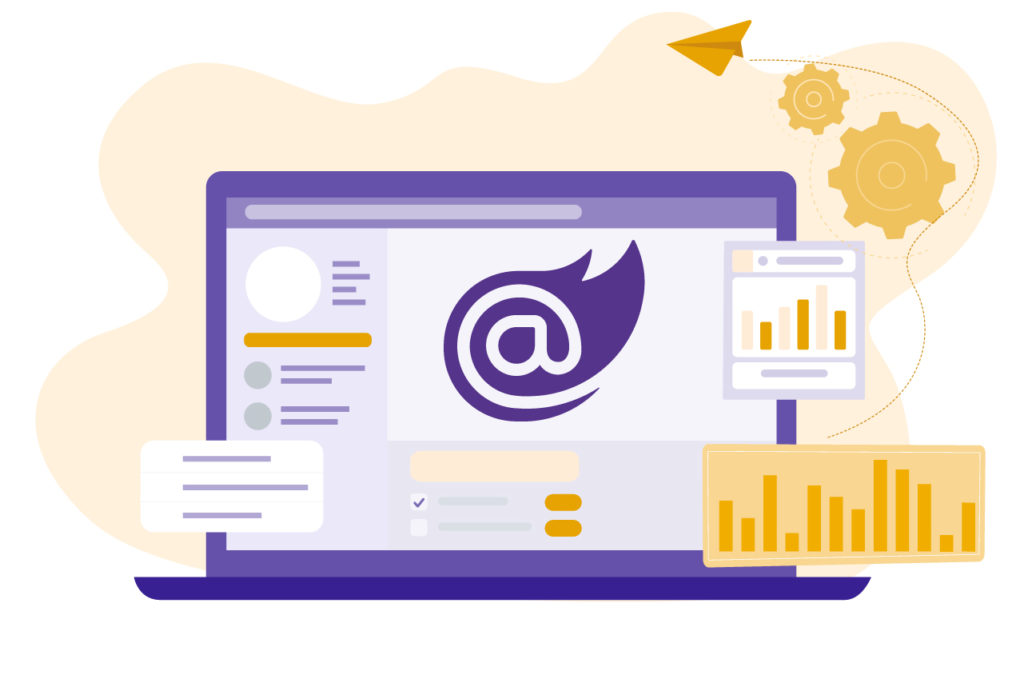 The goal of almost every company is to minimize costs and maximize revenues. Blazor seems to support these goals.

By building web applications based on Blazor, you can prepare the interface design and pass it to C# programmers for implementation on the frontend side of the application. Additional knowledge of frontend frameworks such as Angular, React or Vue is not needed here. Thanks to this, the time needed to deliver the next feature of the application is minimized. The boundary between the competences of frontend and backend developers is also blurring. Both frontend and backend worlds are connected so development teams are more integrated and easier to manage. Costs in this area are reduced without sacrificing quality or speed.

It also seems that Blazor improves application quality by reducing errors that are detected during compilation. The frontend of the application uses the same classes as the backend, which eliminates the next place of potential errors. On the frontend side, it becomes possible to use the same frameworks for unit testing. Thanks to the common programming language (C#) and the source code structure, it becomes easier to apply the same good practices (in the backend and frontend). Development teams can interpenetrate and use similar experiences. This means that you can introduce further savings for you for your company.

One to rule them all

Blazor in combination with C# and ASP.NET CORE gives a more consistent technology stack and development environment (Visual Studio or Visual Studio Code). This approach minimizes the number of tools to be managed in the project and possibly to be purchased. This is another point that potentially brings savings in the company.

Additionally, components developed in Blazor are reusable and very easy to share across your company via NuGet packages. This allows the frontend items to just be another library that can be reused in other projects.

Is Blazor the only way?

Above are the advantages of using from the company’s perspective. They come down to one word – savings. Whether it’s time or money. And usually both.

But what about developer perspective?

Absolutely not. You are free!

First of all – Blazor will do great in the case of internal enterprise applications based on the .NET Framework platform, but not only such software is created. There are also applications for external client. And in this case, after all, Blazor with its weight on the first launch and still less support in browsers will not necessarily be a good choice. Although it will probably change with subsequent versions and changes on the browser market. Besides, Blazor Server side solves the compatibility problem because it renders the view on the server side.

Second – not every company can afford to switch to Blazor. Usually, companies already have a developer teams that is great at the frontend. And they already have a large number of components or practices that it is a pity to throw away into the trash and introduce completely new ones. So we’ll still need this knowledge of JavaScript. At least to be a valuable developer also in slightly older projects or in companies where you cannot afford to switch to Blazor.

Our conclusions are following – Blazor apps seems to be the future standard of .net web development. It is bringing a revolution to the world of web development. Microsoft introduced Blazor to provide the .net developers a robust frontend and backend solution. It helps bring the power of .net to the client-side.

If you are considering building a system based on the Blazor framework, we would be glad to advise you.

Retrieving Data From The Database

Update Your Database With As Less Connection As Possible

How To Connect .NET Application With Google Drive