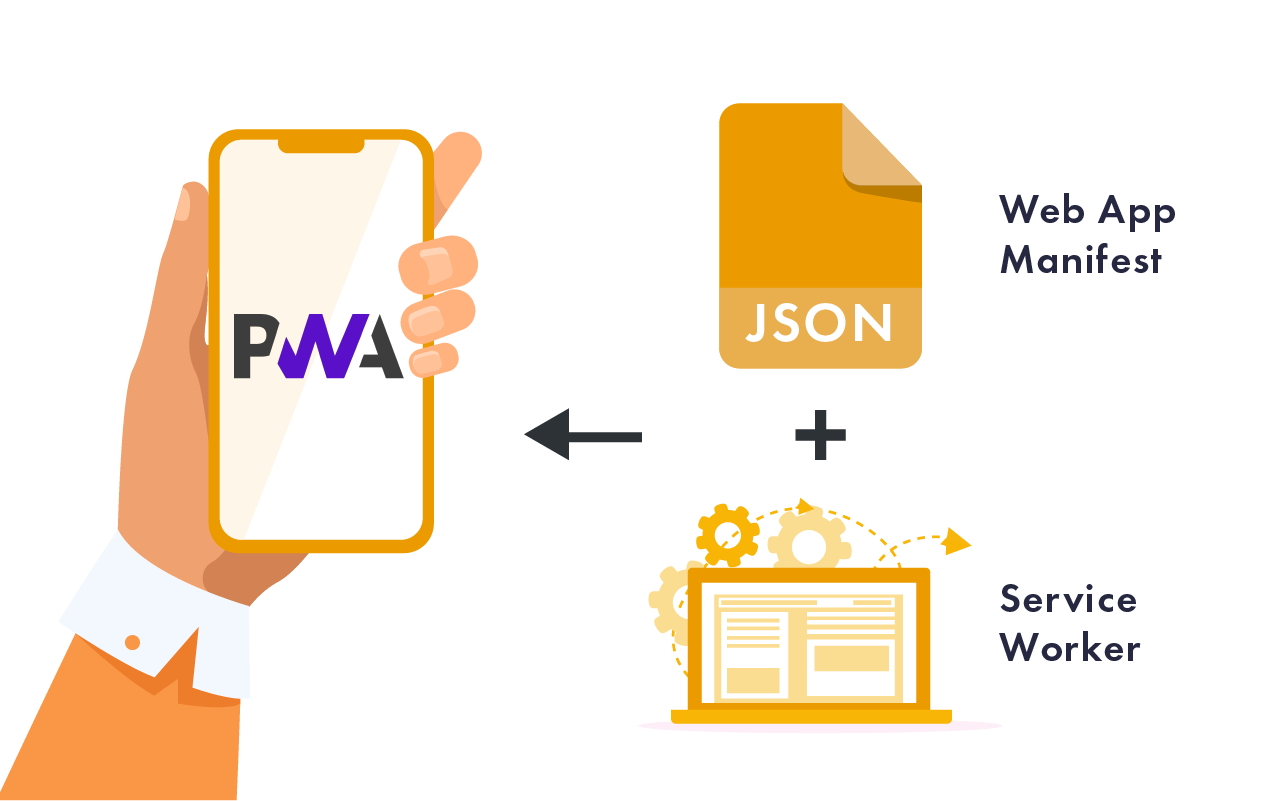 In the current world of technology we see a consistent blurring of boundaries between the creation of native applications dedicated to a specific system platform and web applications available through internet browsers. 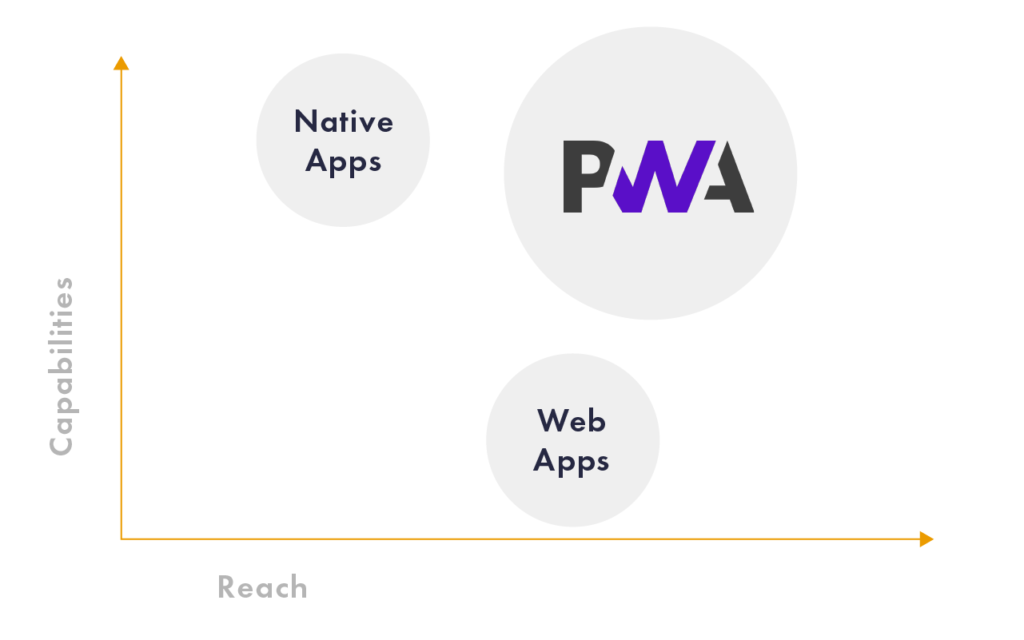 One of the technologies that combines both of these worlds is – Progressive Web App (PWA).

What does Progressive Web App mean?

Progressive Web Apps are web applications that have been designed so they are capable, reliable, and installable.

Steve Jobs presenting iPhone and also the idea of PWA:

The full Safari engine is inside the iPhone. And so, you can create amazing Web 2.0 and Ajax apps that look exactly the same and behave exactly like apps on the iPhone. And these apps can integrate perfectly with iPhone services. And guess what? There’s no SDK that you need.

A fully-capable progressive web app should provide all of the following advantages to the user. 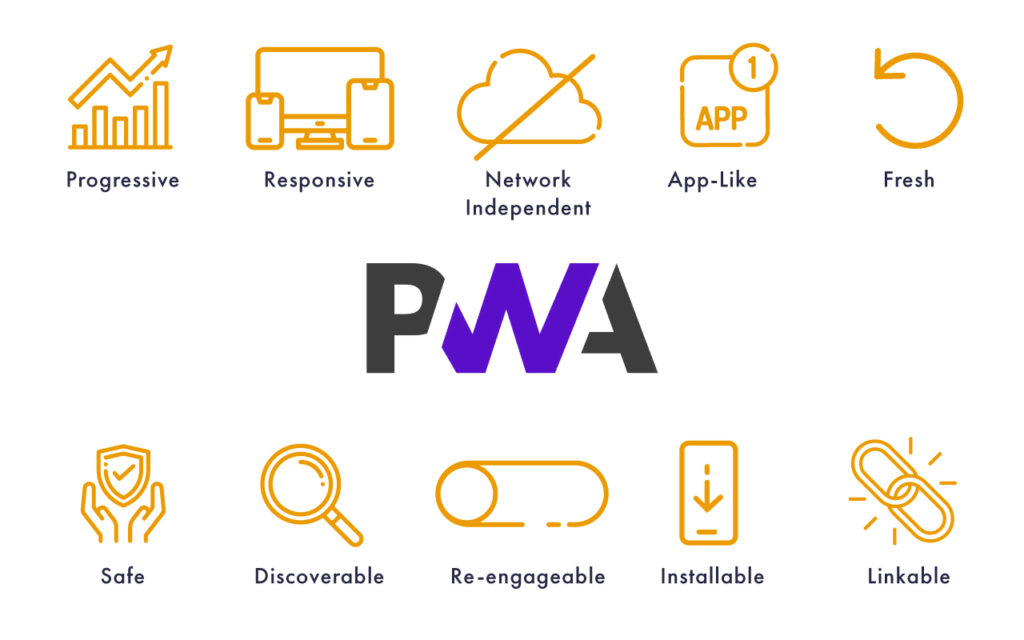 Progressive web apps exist in the web, just like any other websites, and can be found via major search engines, social media, and links from other website.

PWAs should also identified as applications by web app manifest, which defines features of an app such as name, icon, splash screen, and theme colors in a JSON-formatted manifest file. This is for use in contexts such as app listings and device home screen.

PWA can be available on the device’s home screen or app launcher like a native app.

A core part of the web app experience is for users to have app icons on their home screen, and be able to tap to open apps into their own native container that feels nicely integrated with the underlying platform.

PWA can be made available in the form of a simple hyperlink without the need to put it in the app store and go through a complicated installation process.

PWAs work offline or with a poor network connection.

This is achieved using a combination of technologies: Service Worker to control page requests, the Cache API for storing responses to network requests offline, and client-side data storage technologies such as Web Storage and IndexedDB to store application data offline.

It’s still usable on a basic level on older browsers, but fully-functional on the latest ones.

Modern web apps can be developed to provide an excellent experience to fully capable browsers, and an acceptable experience to less capable browsers. This approach has been used for many years with best practices such as progressive enhancement. By using progressive enhancement, PWAs are cross-browser. This means developers should take into account the differences in implementation of some PWA features and technologies between different browser implementations.

One major advantage of native platforms is the ease with which users can be re-engaged by updates and new content, even when they aren’t looking at the app or using their devices. Modern web apps can now do this too, using new technologies such as Service Workers for controlling pages, the Web Push API for sending updates straight from server to app via a service worker, and the Notifications API for generating system notifications to help engage users when they’re not actively using their web browser.

It’s usable on any device with a screen and a browser—mobile phones, tablets, laptops, desktops, TVs, etc. Responsive web apps use technologies like media queries and viewport or RWD (Responsive Web Design) to make sure that their UIs will perfectly on any device.

The connections between the responsive web app and the server are secured (via HTTPS) against any third parties trying to get access to sensitive data. 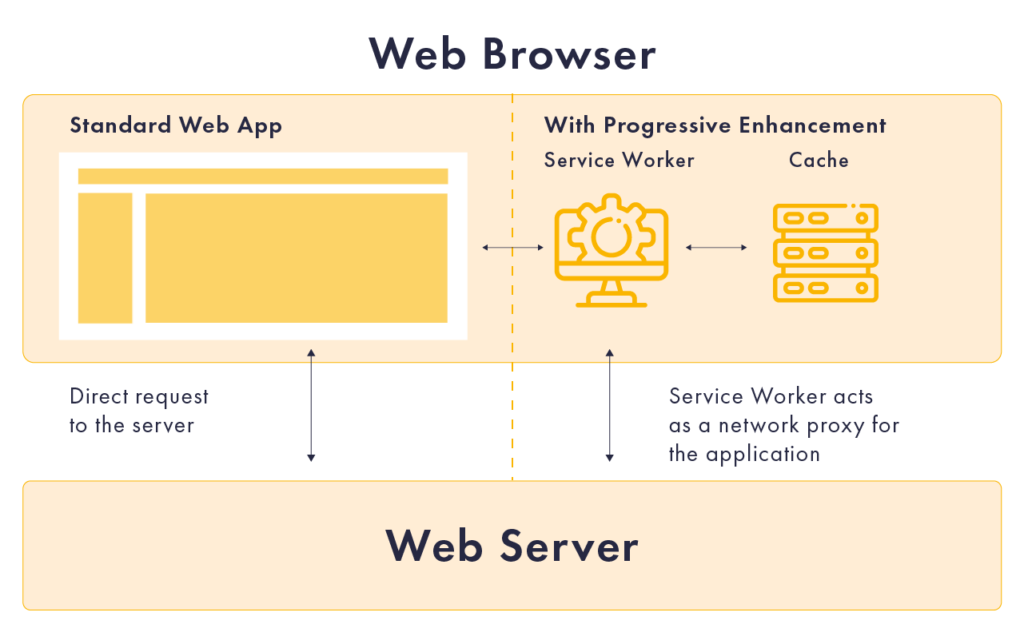 PWAs don’t depend on a single API. There are many web technologies that are used to create progressive web apps.

To meet the minimum requirements, PWAs must contain at least:

The web app manifest is a JSON text file (usually named manifest.json). This file contains all the necessary information to download and run PWA just like a native application.

The manifest can contain following informations:

A service worker is a script written in javascript that allows intercepting and control of network requests and asset caching from the web browser. With service worker, web developers can create reliably fast web pages and offline experiences. It’s a browser feature but it doesn’t have access to the DOM, its role is different than a normal JS script.

Service worker only run over HTTPS and must be secured in this way because service workers can intercept network requests and modify responses. A service worker is a web worker that implements a programmable network proxy that can respond to web request of the main document.

It is able to check the availability of a remote server and to cache content when that server is available, and serve that content later to the UI part of PWA. Service workers, like any other web workers, work separately from the UI context. Service workers can handle push notifications and synchronize data in the background, cache or retrieve resource requests, intercept network requests and receive centralized updates independently of the document that registered them, even when that document is not loaded.

A Progressive Web Application is usually a Single Page Application (SPA) that uses modern browser APIs and capabilities to behave like a desktop app. WebAssembly (e.g. Blazor) is a standards-based client-side web app platform. It can use any browser API, including PWA APIs to build progressive web apps.

Internet connections can be unstable or non-existent on the go, which is why offline support and reliable performance are common features in progressive web apps. Even in perfect wireless environments, judicious use of caching and other storage techniques can substantially improve the user experience. There are several ways to cache your static application resources (HTML, JavaScript, CSS, images, etc.), and data (user data, news articles, etc.) 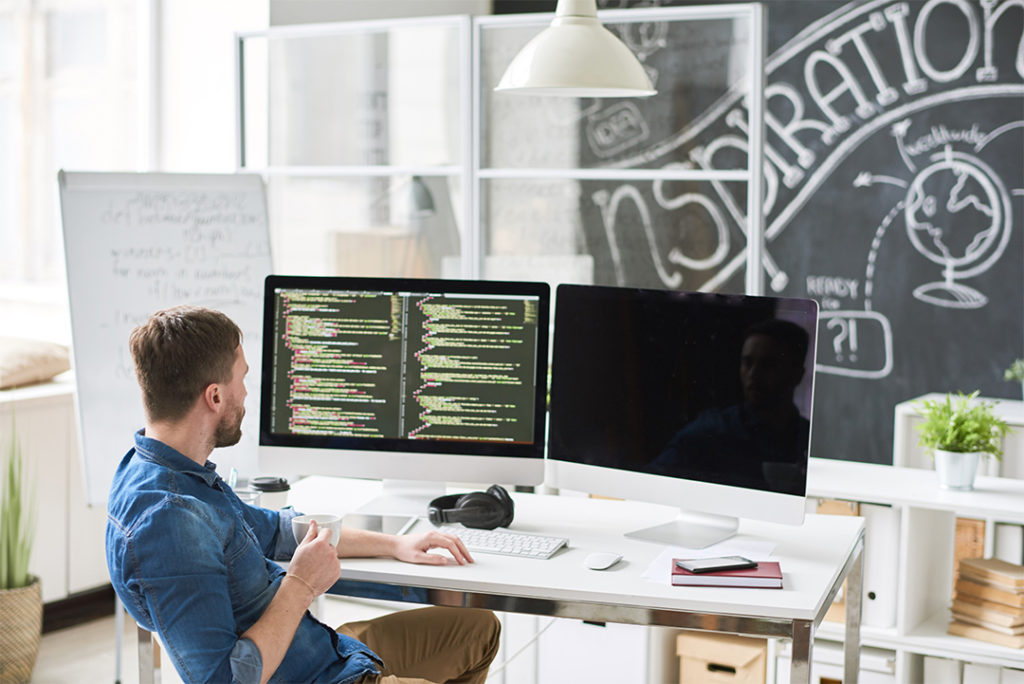 Are Progressive Web Apps suitable in all possible situations?

Before you decide on the technology of implementing your application, you should answer a few important questions.

PWA seems to be the only multi-platform solution. Building on the basis of one codebase and using it on different devices iOS or Android seems to be a very tempting solution. However, you can consider using other solutions such as React Native or Flutter.

Both are good but native app is better.

There are areas where the native app takes over PWA:

In the case of PWA, most of the logic is located on the server side, so there is no need to use additional delivery and update mechanisms, such as the Apple App Store or Goole Play. Notifications about the new version are sent directly to the PWA application, where, after user acceptance, an update takes place in the context of the PWA browser.

When updating a native application, the entire process is more complicated and time-consuming. The application should be updated in the central application store and then you have to encourage and sometimes force users to download and update the application.

PWA uses well-known technologies in the web world. No limits. You can use React, Vue, Angular, or any other browser-supported library. Another benefit of using the progressive approach is writing your code in plain JS or some other JavaScript superset – TypeScript. Currently, JS is the only language that allows you to use the same technology on the backend, on the web, and on mobile devices (one language rules them all!).

The total cost of the product

Last but not least. People love cross-platform solutions and the reason is simple. They can only pay once and I have support for Android, iOS, desktop or web. Maintaining an application is in many cases much more expensive than the development phase. Maintaining the same application over many can cost more than maintaining a single but multi-platform application. This fact has to be taken into account if you are considering your project from a long-term perspective. 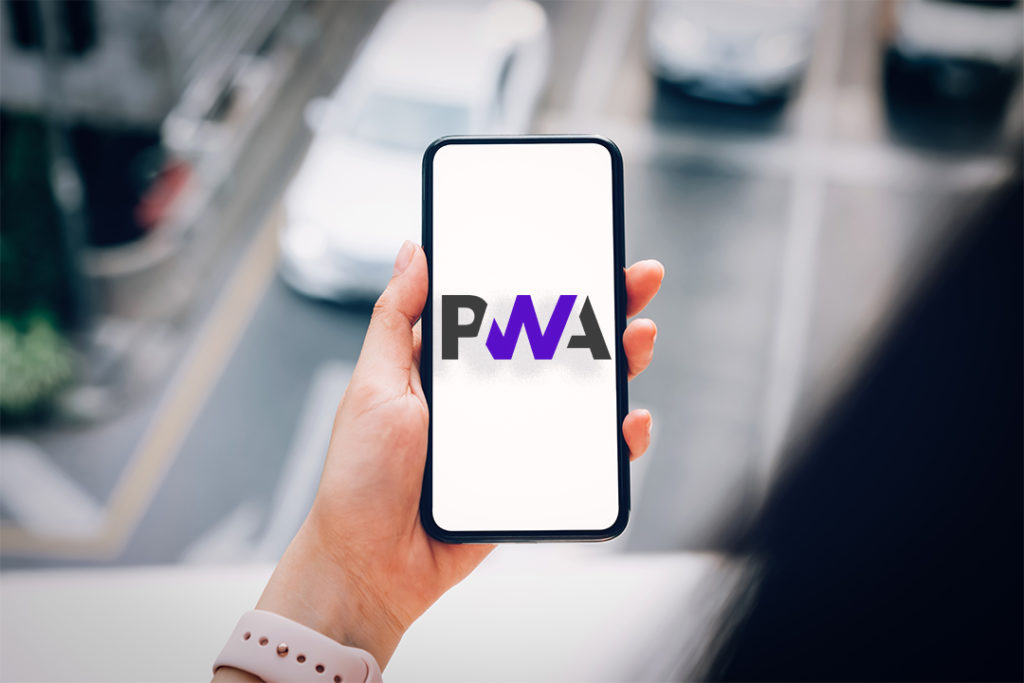 PWA is becoming a real alternative to creating native applications for mobile platforms as well as desktop applications. In many cases, it is easy and quick to provide functionality to customers using a common set of tools and technology. Nowadays, when the process of creating and delivering new versions of applications is becoming increasingly shorter, PWA appears to be an interesting approach to the development of new solutions for our clients.

If you want to take your business to the next level based on PWA, please contact us. We are happy to help.

What Is An Application Prototyping And Its Benefits?